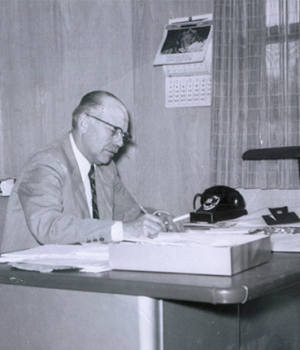 After serving in France during WWI, Charles Suter founded The Suter Company in 1925 with a tremendous work ethic, strong sense of Integrity, and a simple desire to start his own business. During its humble beginnings the Company moved from the original farm in Palatine, to Genoa, to downtown Sycamore before finally constructing the original portion of the May Street production facility in Sycamore, IL in 1947. The Company operated an egg candling and eviscerating operation in the early years – distributing chicken meat and eggs to restaurants throughout Northern Illinois. Survival through the Great Depression and WWII was the top priority of the early years. Charles’ legacy can be summed up by the ideals of hard work, persistence, and Integrity. His founding values remain alive today and are fundamental to the ongoing success of the Company almost 100 years after he decided to set out on his own. Charles introduced his two sons to the business at a young age and eventually passed the reins over to George and Chuck in the mid-1950’s after they completed college and military commitments.  Charles retired by 1960 and passed away in 1970.